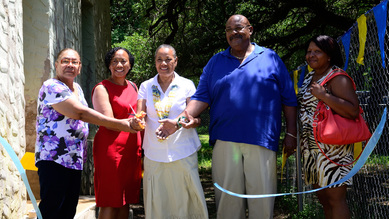 Rafaela Brown, Bertha Benson, Augusta Pines, Clarence Ward, Mary Vasquez
Museums are often spaces for memory. They bring the distant past to our immediate present, sometimes taking us to faraway lands and unfamiliar cultures. They have the capacity of creating an experience by stimulating our imagination with all sorts of information, like images, documents, writings, antiques and sounds. All this to make us learn something new, to help us remember forgotten pieces of the past, to complete puzzles in the way we know history, or to teach us about who people are and what their experiences have been. The Seminole Negro Indian Scout Museum intends to do all this by telling us the story of a people, and adding a piece to our knowledge about Brackettville. Saturday was a special day for Brackettville and for the Seminole community. A long awaited project finally saw its consolidation: The opening of the Seminole museum.

The museum was originally created in 2010 by a group of Seminoles who wanted to keep the memory of their people and to honor Miss Charles Emily Wilson, a person who worked hard for her community, taught at Carver School, and founded SISCA (Seminole Negro Indian Scout Cemetery Association) to preserve the cemetery and to give continuity to Seminole tradition. They gathered family photographs, newspaper articles, and collected historical information to establish the grounds of the museum, and they started opening it during Seminole Days in September as part of the celebration.

It is in 2015 that the museum opens for the first time to the general public and on a regular basis. Under the leadership of Augusta Pines, president of SISCA, the museum was reorganized and arranged, incorporating artifacts found at the Seminole Camp in Fort Clark, furniture, and historical information.

The opening event of the museum was very impressive. The old building of Carver school, where the museum is located, was full, with attendance of approximately 50 people from Brackettville, Del Rio, Dallas, Austin, and surrounding areas. After the museum was inaugurated with the symbolic ribbon cut, people entered the building and took their places. Then Augusta Pines said a prayer and let Windy Goodloe give the welcoming words. After this, they showed a video made by the Texas Historical Commission that talks briefly about the history of the Black Seminoles and their migrations from Florida to Indian Territories, Mexico and Texas. The video also shows the testimonies of Augusta Pines and Bertha Benson, and mentions the Seminole language, spoken by Seminole ancestors and still remembered by people like Ms. Benson, who gives a brief demonstration of it in the video. Following the video, Clarence Ward, former president of SISCA, spoke about the history of Carver School and about the making of the museum, and presented Augusta Pines with the book “Our Land Before we Die” written by Jeff Guinn as the starting piece of the library at the museum. Mayor Andres Rodriguez also said a few words, making emphasis on how important it is to have the Brackettville community united by events like the opening of the museum. Later, Lee Young took the word and mentioned the importance of recognizing the Seminoles as a group and to preserve their history. Finally, Windy Goodloe explained the logic of the museum, describing each of its sections and why they are there.

When the presentations were over, people took the chance to take a careful look at the sections of the museum while listening to Negro Spiritual songs in the background. Many of the Seminoles showed people the pictures of their families and talked about their memories while visiting the museum. It was a very emotive event which closed with great food made by Seminole women in Del Rio.

The museum consists of 8 sections: 1. The history of how Black Seminoles came to be and their multiple trajectories across territories, including Florida, Indian Territory, Mexico, and Texas. 2. The military period of the Seminole Negro Indian Scouts. 3. Families and their living conditions. 4. Carver School and a dedication to Miss Charles Emily Wilson. 5. Seminole celebrations, including Juneteenth and Seminole Days. 6. The Seminole Camp and artifacts found there. 7. The cemetery section honors descendants that have passed away, including the four Medal of Honor recipients. 8. Newspaper articles and documents about the Seminoles.

The museum will be open every Saturday from 1 to 4 pm and it will hold events like temporary exhibits and talks.  Admission is $5 and donations are accepted for the improvement of the museum. This is only the beginning.

The museum and the event were made possible as a result of the efforts and contributions of many people. Thanks to all the people who attended the event and gave donations, and a special recognition to Mr. Rusell Nowell and the FCHS who donated a wonderful display cabinet from the 19th century and the artifacts from the Seminole Camp.

Everybody is welcome to visit the museum and learn more about Seminole history!

Videos of the Grand Opening